No, really, I am not a big fan of Diana, Princess of Wales. Very likely she was even the main reason for me not having a soft spot for the British royals. I started following the royals early 1980. We had a portfolio with magazines (called a ‘leesmap’ in Dutch) delivered at home weekly. Of course the magazines were already a few weeks old, but I loved reading them and watching pictures. The portfolio also included tabloid magazines like Privé, Weekend and Story. And they were often full of royal stories. Most of them were about the royal families of the Netherlands, Great Britain and Monaco. Funnily enough some of the royal families that I stopped loosing my interest in at a later date. Apart from my own royal family, but that might be different. I guess I read so much about the British royal family – especially about Diana – and the princely family of Monaco at the time that I read enough for the rest of my life. I still read lots of news about them online though. It doesn’t stop me from visiting royal sites in Great Britain though. 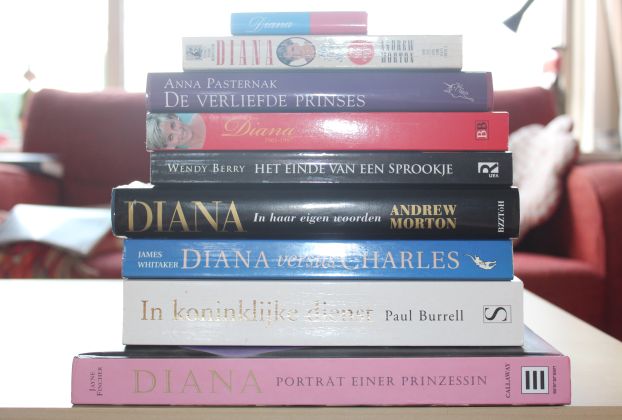 Looking at my bookshelves I however came up with several Diana books anyway. I have another book, which however is so thick and hidden behind some other stuff, that I decided not to take it out. I just noticed too I have the Andrew Morton book (old version) double, a pocket in English and another Dutch version. I even have a Paul Burrell book. To be honest I can’t remember when I read them. The picture book at the bottom (German version) is wonderful though.

Diana was however there throughout all these years that I have been royalty watching. I saw the wedding on TV I guess, as I was 7 at the time and we did have a black and white TV. We only got a colour-television in December of that year, for another royal reason, the Sissi-films. I still have some magazine reports of the engagement, wedding, the birth of the princes William and Harry somewhere. A few thin magazines must be around somewhere also. To me as a young girl Diana was of course a real fairy tale princess. But as I said all the reports made me become less interested in the end. And I was not too fond of the Andrew Morton book, nor of the interview she did for the BBC later on. I still think it is something she shouldn’t have done.

Her death came when I had left my parent’s home already and was living on my own. Actually my parents visited me that Sunday. That might have been the reason I didn’t turn the television on like I often did, if only for reading the news on teletext. My parents and I had a nice day, made a walk to the nearby countryside. And when coming home my father turned on the TV – again. Previously, before the walk, my mother and I were likely talking and not paying notice to the TV. When coming back however we landed in the middle of lots of Diana news and quickly understood what had happened. Shock of course! Turned out my father had noticed something before, but hadn’t told anything, not being interested in royals at all. Diana was all we talked about afterwards of course. I am sure I watched the funeral on television too, as well as other news reports.

I find it such a pity that so many people who knew her think it was necessary to talk about her extensively and even write books about her. Sometimes probably even exaggerating their friendship with her. There is so much and I wonder how many of these people are telling the full truth, or at least part of it. I guess that as long as they get paid for it and people are interested in hearing these stories, they will continue. I don’t think I have heard much new information in the past weeks, not even in the newest documentaries. I only think it was nice that Prince William and Prince Harry finally talked about their mother on the occasion of the 20th anniversary of her death. I wonder if it isn’t about time to leave her in peace after 20 years.