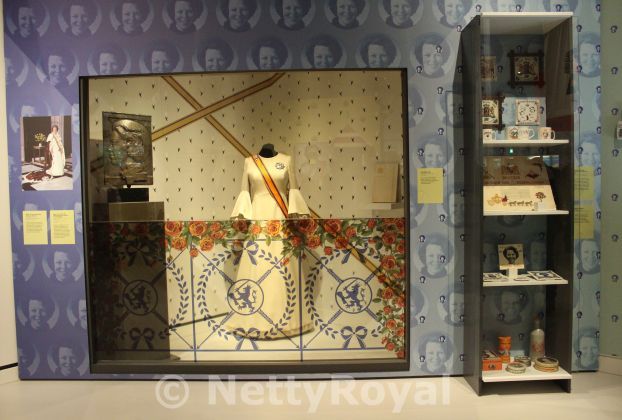 Somewhat of a busy Saturday in ‘s-Hertogenbosch. A friend and I wanted to pay a short visit to the Noordbrabants Museum in this city in the south of the Netherlands. For me the Province of Noord-Brabant is quite a trip. There was another nice exhibition in a city near ‘s-Hertogenbosch, which made it easy to combine and not just to come especially for one thing. There are several exhibitions at the Noordbrabants Museum, but we were mainly interested in a small part of one of the exhibitions. Not that the rest didn’t sound good, but  it was unfortunately way too crowded inside to our liking to tour more. Although the exhibition “De Jaren 80” (The 1980s), which only runs from 3 June to 15 October, is officially in the Noordbrabants Museum, with our Museumkaart it would have been much easier entering through the Stedelijk Museum. It probably took us more time to find a locker and the exhibition than to look at the piece we wanted to see.

Our main interest was of course something royal. On 30 April 1980 Queen Juliana of the Netherlands abdicated and handed over the throne to her eldest daughter Queen Beatrix. Julianas announcement on 31 January 1980 was actually the start of my lifelong interest in royals. The day of the inauguration of Queen Beatrix in Amsterdam wasn’t only a festive day with lots of souvenirs – some of them on display at the exhibition. There were protests in the city. One of their slogans was “Geen woning, geen kroning” (No house, no coronation).

The ivory-coloured dress that Queen Beatrix wore on 30 April 1980, designed by her couturier Theresia Vreugdenhil is on display at the exhibition in the museum. The wide sleeves are funnily enough quite popular again nowadays. A bit odd are the undersleeves, actually a portrait of Anne Boleyn, the second wife of King Henry VIII of England, was used as an example. The reason was: Beatrix didn’t want the sleeve to move when she took her oath. And so it happened … A lovely, much more extensive article about it in Dutch can be found at Royal Glitter. A truly royal start of the 1980s.