A friendship that became a rivalry. A rivalry that became a war. “Mary Queen of Scots” explores the turbulent life of the charismatic Mary Stuart (Saoirse Ronan). Queen of France at 16 and widowed at 18, Mary defies pressure to remarry. Instead, she returns to her native Scotland to reclaim her rightful throne. But Scotland and England fall under the rule of the compelling Elizabeth I (Margot Robbie). Each young Queen beholds her “sister” in fear and fascination. Rivals in power and in love, and female regents in a masculine world, the two must decide how to play the game of marriage versus independence. Determined to rule as much more than a figurehead, Mary asserts her claim to the English throne, threatening Elizabeth’s sovereignty. Betrayal, rebellion, and conspiracies within each court imperil both thrones – and change the course of history. 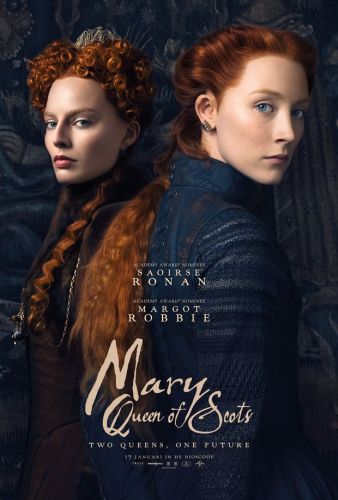 Mary, Queen of Scots (1542-1587) – a Roman Catholic – was the only surviving legitimate child of King James V and his second wife Mary of Guise. She reigned in Scotland from the age of 6 days, when her father died, to 24 July 1567. She was crowned in 1543, aged six months. For years Scotland was reigned by regents. For her safety and because she was married of she was sent to France at the age of five. She married in 1558 François, Dauphin of France (1544-1560), who became King François I in 1559.  In 1561 Mary returned to Scotland. Her second husband 1565-1567 was Henry Stuart, Lord darnley, her first cousin. Their son James – the later King James VI (I) was born in 1566. February 1567 Darnley was murdered, and only two months later Mary married James Hepburn, 4th Earl of Bothwell, who was possibly responsible for Darnley’s death. She was forced to abdicate in favour of her son in July 1567. She fled to England to seak the protection of her cousin Queen Elizabeth I. As a claimant to the English throne, Mary was considered a threat and Elizabeth had Mary confined. 1586 Mary was found guilty of plotting to kill Elizabeth. She was beheaded in 1587 at Fotheringhay Castle.

Elizabeth I, Queen of England, Wales and Ireland (1533-1603) – an Anglican – was the daughter of King Henry VIII and his second wife Anne Boleyn. At the age of 2 Elizabeth was declared illegitimate. She nevertheless succeeded her elder Catholic half-sister Queen Mary I in 1558. Although she was expected to produce an heir, she never married. In 1603 she was succeeded by King James VI of Scotland, Mary’s son, who became King James I and united the Scottish and English thrones.

Both the second (Jack Lowden) and third (Martin Compston) husband of Mary figure in the film, as does Elizabeth’s counselor and lover Robert Dudley (Joe Alwyn). Further important figures are James Stewart, Earl of Moray, as Mary’s chief-advisor (James McArdie), Mary’s halfbrother, and her four attendants, all called Mary. An interesting figure is Mary’s confidant David Rizzio (Ismael Cruz Córdova), who was murdered in 1566. On the English side there is Bess of Hardwick (Gemma Chan), Elizabeths confidante. Also the protestant cleric John Knox (David Tennant), who led the Reformation in Scotland, shows up frequently, as do William Cecil, the 1st Baron Burghley (Guy Pearce), who was Elizabeth’s long-time advisor, and Lord Randolph (Adrian Lester), the English ambassador to the Scottish court. Furthermore there are a few – cute – appearances of little Prince James.

This film was much more my cup of tea than The Favourite, a real historical royal drama. The book is based on the revisionist biography “Mary Queen of Scots” by Dr. John Guy, a British historian, published in 2004. He gave a report about her youth in France and the quality of her performance as a monarch. Also used is material from letters that were discovered in 2010. The film covers the period from 1561 to 1587, focussing on the period 1561-1567.

Mary and Elizabeth have always been compared with each other (have times changed at all you wonder?), despite of being different women each reigning a different country. In a time that women hardly got the chance to rule, they were Queens in their own right. A world in which men dominated and tried to gain power over them. Director Josie Rourke had described the story as a “psychological dance between these two queens”.

The web of power and conspiracy around Mary and Elizabeth is well visible in the film. Both Queens are powerful and characterful. They are being portrayed as friends and rivals, who were regularly in touch. One of the main themes that comes back is the fact that Mary wished to be named Elizabeth’s heir in case she died before her without an heir, but didn’t actually want to claim the throne. A united kingdom was to be a peaceful one. Although they never met, in the film this does happen once.

The dialogues are often very good, there is quite a bit of action – although the sounds in my cinema were sometimes just a bit too loud to my liking. Especially the scenery in Scotland is amazing, but I also very much liked the costumes, hairdo of the ladies. Sometimes I however got lost a bit, as the men’s faces by times looked a bit too much alike. But probably that is just me.

See also History Extra’s piece on the real history behind the film.

Just not too many books …