NettyRoyal
Leave a Comment on Film review – The Favourite

Although the year has only just started one of the Dutch newspapers already calls “The Favourite” by director Yorgos Lanthimos one of the best films of 2019. Do I agree? I don’t think so, really. Let’s hope Mary, Queen of Scots, that will be in the cinema soon, will be better. The trailer certainly looks good. 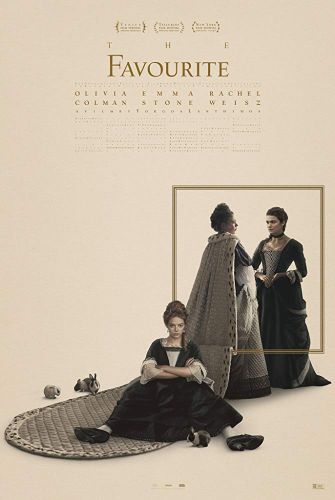 Early 18th century England is at war with the French. Nevertheless, duck racing and pineapple eating are thriving. A frail Queen Anne (Olivia Colman) occupies the throne and her close friend Lady Sarah (Rachel Weisz) governs the country in her stead while tending to Anne’s ill health and mercurial temper. When a new servant Abigail (Emma Stone) arrives, her charm endears her to Sarah. Sarah takes Abigail under her wing and Abigail sees a chance at return to her aristocratic roots. As the politics of war become quite time consuming for Sarah, Abigail steps into the breach to fill in as the Queen’s companion. Their burgeoning friendship gives her a chance to fulfil her ambitions and she will not let woman, man, politics or rabbit stand in her way

Queen Anne of Great Britain (1665-1714). Heir to the British throne 1694-1702, when she inherited the throne from her brother-in-law King William III. In 1683 she married Prince George of Denmark (1653-1708). Seventien pregnancies between 1684 and 1700 led to miscarriages, stillborn children and a few children that survived birth but not childhood. Her husband not surprisngly isn’t to be seen in the film at all, while her children are remembered in a rather funny way. She had an ill health, became corpulent, suffered of gout in her later life and used a wheelchair or sedan chair a lot.

Sarah Churchill, The Duchess of Marlborough (1660-1744). Wife of the 1st Duke of Marlborough (1650-1722), who acted as Anne’s agent after her father King James II had fled the country. When Anne in 1702 finally ascended the throne, it were Sarah’s husband, together with Sidney Godolphin, the 1st Earl of Godolphin (1645-1712), who governed the country. The strong-willed Duchess was powerful and a dangerous enemy.  She however also didn’t spend enough time at court to Anne’s liking, after she had become the Queen. The tensions between Anne and Sarah led to the Marlboroughs loosing their positions and state funding for their home in 1711. They left England to travel, and only returned after Queen Anne’s death in 1714.

Abigail Hill (ca. 1670-1734) was a cousin of the Duchess of Marlborough, who worked as a servant after her father’s speculations left the family without money. In 1704 she was appointed in the Queen’s Household as Lady of the Bedchamber. She slowly began to replace her cousin as favourite of Queen Anne. In 1707 she married Samuel Masham, 1st Baron Masham (1678/79-1758), who received his title in 1712 on the condition that Abigail remained her dresser. 1711 Abigail was made Keeper of the Privy Purse. After Queen Anne’s death she retired into private life, while her husband remained in the service of the Royal Family.

Furthermore we see frequent appearances of the Duke of Marlborough, Robert Harley (later 1st Earl of Oxford and Earl Mortimer), Samuel Masham and Earl Godolphin. The Duke of Marlborough spent most of his time abroad as result of the War of the Spanish Succession 1701-1714, reported simplified as the war between England and France in the film. The English didn’t favour France gaining more power in Europe. The Duke was the de facto leader of the Allied forces, and his victories on the fields of Blenheim 1704, Ramillies 1706, Oudenarde 1708 and Malplaquet 1709 are well-known. I am not quite sure which ones are being mentioned in the film.

Not knowing much about Queen Anne and her time it took me a while to get into the story. The acting is rather good, the film is not a traditional costume drama. It is rather refreshing that women take the stage, instead of men. However the film is divided into eight chapters it seems, which I find somewhat disturbing and made it hard to really become part of the film screen. The main story about the jealousy between Sarah and Abigail, and their fight to remain the Queen’s biggest favourite, is being told rather well. However I do find that the way the story was filmed, and the way the people in the film are being portrayed, leaves me rather unsatisfied. The courtiers, especially in the highest positions, show rather childish behaviour (throwing fruits at each other, drinking, partying). Although there are many stories like that, one can hardly believe that this was the usual way of life all day long.

As usual, historical facts are being mixed up all through the film. Several characters look much younger than they actually were at the time, Sarah and Abigail are looking much younger than the Queen. The film is based on facts that took place between let’s say 1704 and early 1711, but, not unusual, nobody alters, and you get the feeling it all takes place within months, while it was actually a process of years. Sarah and Queen Anne of course spend much more time together than was the case in reality, and Sarah witnessed in person how Abigail becomes the Queen’s favourite instead of her. At the start of the film I rather liked Abigail, and didn’t like Sarah at all, while in the end I started to think the opposite.

Although Wikipedia says Queen Anne took a lively interest in affairs of state and was a patroness of theatre, poetry and music, that is not how the film shows her. The film depicts her as a weak, disillusional, sad and a rather mad woman, who lets Sarah rule in her place and has no interest in anything else than her 17 rabbits (representing Queen Anne’s deceased children) and Lesbian love. Although Olivia Colman does a good job playing the Queen Anne that the film makers wanted to make of her, it is really a pity that the film doesn’t do the real Queen Anne any justice.

I am not a fan of the costumes either. They sometimes look very much like belonging in a theatre. Regularly all ladies seem to wear dresses made from the same colour and fabric, and on a few occasions they even wear trousers. Being somewhat familiar with English dancing, I don’t think the scene with a dance at court will ever have looked as modern as that.

See also History Extra’s piece on the historical inaccuracy of the film.