The American actress Meghan Markle was not the first woman or man from the USA to marry into nobility or royalty. Already in the late 18th century the first American women married into noble families, and this continued all through the 19th century until today. According to Crowning Glory the American invasion in the British society really started with the marriage in 1874 of Jennie Jerome and Lord Randolph Churchill, a brother of the 8th Duke of Marlborough. They were the parents of Sir Winston Churchill.

The USA was full with rich heiresses, who had money but lacked a title. While in Great Britain only the eldest son of a nobleman would inherit the title, and younger ones would not be more than a Lord or Hon., in most European noble and royal families all members of a family had a title. Nobles and royals didn’t always have the money to keep up with a certain lifestyle. Of course some people married out of love, but often the exchange of titles and money was the most important reason to get married. When the heiress didn’t have as much money as she was expected to have, engagements could even be broken off. Nobles sometimes even advertised in a US-newspaper to find themselves a wife. In these times royals and nobles seldom married for love.

First it were mainly royal men marrying American women. Only after World War II it became more common for royal women also to marry Americans. Nowadays it is not very unusual for a royal anymore to marry someone who is not noble/royal, and even comes from another country. It also not necessarily leads to loosing succession rights to a throne. The world has become so much smaller that it is easier to meet people coming from other countries and even other cultures.

Who were the Americans that married into royal houses? I had a look at the royal houses over the past two centuries to see which Americans actually made it to royalty, sometimes even long before Meghan Markle was even born. Any more suggestions are welcome. I didn’t have a very close look at Americans marrying non-European royals and just entered a few known ones.

Furthermore in 1909 it was reported that Luigi Amedeo, The Duke of the Abruzzi (1873-1933)y, a grandson of King Vittorio Emanuele II of Italy, had become engaged to Katherine Hallie Elkins (1886-1936). His family apparently opposed against the union. The couple met in 1907 and courted until 1912. Encouraged by her father and brother she ended the courtship and in 1913 married William Hitt, whom she divorced and remarried in 1933.

There surely are many more examples in mediatized houses and noble families, also in Asia. But then the list would really become too long. I excluded members of royal families from morganatic and illegitimate branches of families.

In which states of the USA were these American royals actually born? I just made a quick table based on the information above. Not surprisingly most of them seem to have come from New York, but other states might surprise you a bit more. Just be aware, the state of birth might not be the state someone grew up in. 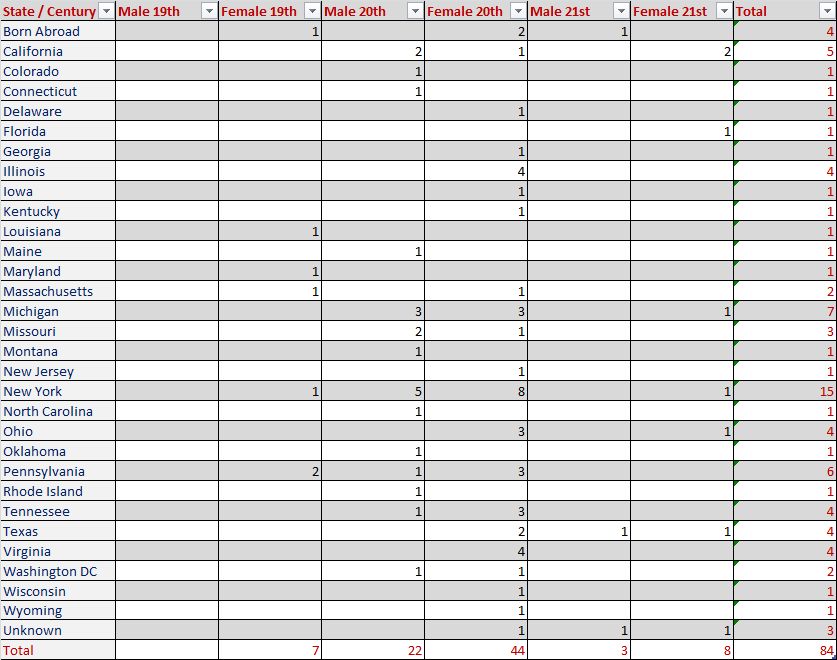