NettyRoyal
Leave a Comment on What to see in Liechtenstein? 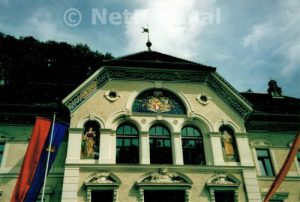 More than 15 years ago I travelled to Liechtenstein to enjoy their national day, Staatsfeiertag, on 15 August 2003. It was a good opportunity to have a look around. I just spent enough days there to enjoy the national day and a few tourist attractions. I would love to go back and have another look at this tiny municipality.

The country is only 160,5 km2 big, has just 38,114 inhabitants (2017) of which 34% has a foreign nationality. It is the fourth smallest country in Europe and sixth smallest country in the world by area. Liechtenstein is situated between Switzerland and Austria. It is divided in the Upland and the Lowland The highest mountain is the Grauspitz with 2,599 metres above sea level. It never takes long to get somewhere, as the longest distance is 24,8 km and the widest distance 12,4 km.

But what should you absolutely not miss when you’re a royalty watcher and castle lover visiting the country?

The residence of the princes of Liechtenstein lies on a hill 120 metres above Vaduz. To have a look at the outside you really don’t have to go far, as the castle can be seen from far away. As you can imagine the castle isn’t open to the public. If you’re lucky you can enter the grounds on 15 August, but entry is nowadays mainly for people from Liechtenstein.

The building was first mentioned in 1322, but the oldest parts – the keep or Bergfried and parts of the eastern side – might be from the 12th century. The chapel was likely also build in the Middle Ages. The castle was burned by the Swiss Confederacy in 1499 during the Swabian War. The Liechtenstein family acquired the castle in 1712. The building fell into disrepair in the two centuries afterwards. A major restoration took place between 1904 and 1912 and again in the early 1920s. The castle was extended in the early 1930s and only became a permanent residence in 1938.

Although a small country Liechtenstein has five castles. Burg Gutenberg is situated on a hill near the centre of Balzers and the bailey is open to the public. Visitors can visit the chapel and rose garden on Sunday between May and October. A guided tour can be arranged during the summer season by appointment. The 12th century castle was first mentioned in 1296. Until 1314 it was in the possession of the lords of Frauenberg. Afterwards the Habsburgs laid hands on it. Its military purpose got lost in the 17th/18th century. There was damage after the Swabian War in 1499 and after a fire in 1795. In 1824 Balzers purchased the ruins and the remains underwent some renovation. 1854 Princess Franziska of Liechtenstein bought the castle. A huge restoration took place between 1905 and 1912 by its new owner, architect Egon Rheinberger. Between 1936 and 1951 it was used for events. In 1979 the Principality purchased the castle and made it into a museum. 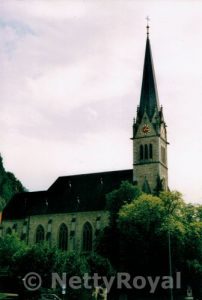 Schellenberg doesn’t have one but two castles, or rather ruins. The largest one, the “Obere Burg” (Upper Castle) was built around 1200 and first mentioned in 1348. The “Untere Burg” (Lower Castle) is smaller and was built around 1250. It was mentioned first in 1317. They were abandoned in the 16th century and thereafter slowly turned into ruins. In 1956 Fürst Franz Josef II handed over both ruins to the Liechtenstein History Association. The ruins are open to visitors.

Liechtenstein seems to have a fifth castle, or rather ruin. Also known as Wildschloss, the castle is located in the northeast of Vaduz. Also this castle is accessible to the public. It was probably build at the end of the 12th century, and was first mentioned in 1237. The building was likely destroyed in the 14th century, but the remains are still there. The princely family handed over the ownership to the municipality of Vaduz in 1933.

The new Gothic St.-Florins-Kirche in Vaduz was built between 1869 and 1873 after plans of Friedrich von Schmidt. The architect Ignaz von Banko led the building proces. The church replaced the old Chapel of St. Florin, which was demolished in 1874. The chapel and the church were named after St. Florin, who lived in the 7th century. More than three-quarters of the building costs were paid for by the Princes of Liechtenstein. The church was renovated in 1965-1968 and 1975-1977.

On 2 December 1997 Pope John Paul II erected the Archdiocese of Vaduz. Until then the Liechtenstein Deanery had been part of the Diocese of Chur, Switzerland. On 12 December 1997 the public ceremony took place and the church received the dignity of a cathedral. On the southside of the cathedral one can find the Liechtenstein Vault, which unfortunately only is open on 1 November. You can however see the outside of the burial place. The cathedral itself is open regularly. Of course several princely weddings have taken place here, like the one of Hereditary Prince Alois of Liechtenstein and Duchess Sophie in Bavaria in 1993, Fürst Hans Adam II of Liechtenstein and Countess Marie Kinsky in 1967. 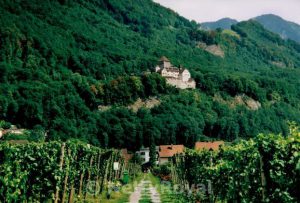 Worth a visit is the Domaine Vaduz of the Hofkellerei des Fürsten von Liechtenstein, the traditional vineyard Herawingert. Four hectares of south-west facing slopes are the centerpiece of viticulture in the principality. The family also owns the Domaine Wilfersdorf in Austria. In September 2017 Prince Constantin and Princess Marie opened the new gastronomy in the Princely Wine Cellar in Vaduz. On weekends it is booked for closed groups mostly, but it is also open during the week. Just enjoy walking through the vineyards or sample the wines. Groups can arrange tastings by appointment and tour the cellar facilities.

If you prefer culture you can visit the Liechtenstein National Museum, that houses a permanent exhibition focusing on the history, culture and landscape of the principality. There are also special exhibitions. From the late 19th century until 1904 the museum was located at Vaduz Castle, which wasn’t a princely residence back then. In the next decades the collection moved regularly. A real museum opened its doors in 1972. Since 2006 also the Postal Museum is part of the national museum, although it was already founded in 1930. Only in 1912 Liechtenstein issued its first postage stamps, of course showing the portrait of Fürst Johann II. Nowadays the Liechtenstein stamps are real collectors items. 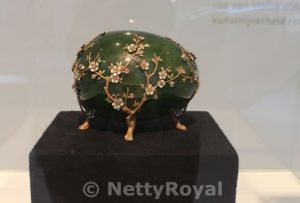 In March 2015 a new museum was opened: the Liechtenstein Treasure Chamber. If you are interested in items from the Princely Collections this is the place to go. The museum focuses primarly on exhibits belonging to the Princes of Liechtenstein and other private collectors. The Princely Collections among others includes paintings by the Old Masters, and also other valuable materials, weapons and gifts presented by kings and emperors are on display. Highlights include the collection of Easter Eggs by Liechtenstein collector Adulf Peter Goop and a replica of the ducal coronet (princely crown) for Prince Karl I of Liechtenstein (1569-1627).

Malbun is a lovely ski resort. In the winter you can go skiing or snowboarding here, like The Prince of Wales and his late wife Diana did in January 1985. In the Summer you could go hiking, that is if you are experienced, otherwise please don’t do it as it can be dangerous and the walk to the valley is much longer than it looks. It was a lovely summer day when I was there in 2003. I took the chairlift to the Sareisjoch mountain restaurant, 2,000 metres above sealevel, had some food and went out for a rather simple walk (on sandals). The views were amazing!

Me in the mountains at Malbun