NettyRoyal
Leave a Comment on A Wedding Book from 1901

Nowadays when there has been a big royal wedding there will be at least one wedding book, probably even more than one. And that has been the case already for many, many years. The eldest wedding book in my possession is from 1901. In that year the publishing house “D. Bolle” in Rotterdam, The Netherlands, published a book called “Onze Koningin en haar Huwelijk. Gedenkboek” (Our Queen and her Marriage. Memorial book) by J.N. van Heesteren, dedicated to the Dutch people. The book has a red cover, the cover text is in gold and there is even a black and white picture of Queen Wilhelmina of the Netherlands and her new husband Prince Hendrik né Duke von Mecklenburg-Schwerin on the cover. The book is richly illustrated according to the first page, which apart from the title of the book and the name of the writer also contains four arms, of The Netherlands and Mecklenburg. I bought it years ago on a second-hand market in the centre of Delft. It once was in the possession of somebody called H.G. Daams.

It is not a wedding book as we know it now. Not a big amount of colourful wedding pictures. One could wonder if the book was printed as quick as possible, as there isn’t even a real wedding picture. Which is a pity as there is known footage of the wedding as well as a few pictures. The book starts with a big official portrait of Queen Wilhelmina  and starts – of course – with all fifteen verses of the Dutch national anthem, the Wilhelmus. There is a festive song, reactions of the media in the Netherlands and abroad after the engagement, of course the official engagement announced on 16 October 1900 and events happening in the few months before the wedding, that took place on 7 February 1901. And very important a bit of history of both royal families, including a portrait of Mecklenburg, as probably not many Dutch at the time had ever been there. There is a short portrait of Prince Hendrik, and of his mother and of Queen Mother Emma of the Netherlands. And in the end a short description of the days before the wedding and the wedding day itself.

It is clear that in the time the book was printed, hardly a bad word was said about the Dutch royal family. Certainly not in books like this one. All you read is a lot of praise for the Royal Houses of the Netherlands and Mecklenburg. And of course the young Queen, hardly 20 years old, seems to have been very much loved by her people. Especially the old-fashioned language – our Sun Queen, our little Queen – is amusing for us, living more than 100 years later. But it is still a nice book to have. 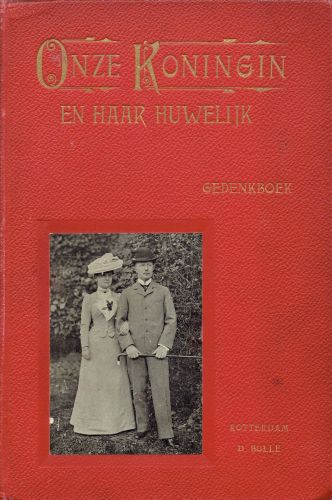