My first thought when I saw my mail today on the doormat was: who has died now? I only saw the back of the envelope at first, which clearly is a mourning letter, but didn’t have any other distinctions. Only when looking at the front it became clear that this actually was a card to thank me for my condolences after the death of Grand Duke Jean of Luxembourg. I am a bit surprised to see my name written as Netty N. Leistra on the envelope, as I normally don’t use the middle initial myself, but I must be in their database somewhere.

Anyway, the envelope contains a simple card with a text in French and signed by Grand Duke Henri of Luxembourg – I thought at first it could be a real signature, but I think it is a good printed one as on the card a friend of mine received, the signature is on exactly the same spot and looks the same too. I also received a prayer card, showing Grand Duke Jean on the front, the Consolatrix Afflictorum Notre-Dame de Luxembourg on the back. Inside are in French the genealogical dates of Grand Duke Jean, on the other side in German a short prayer. I appreciate very much that they have taken the time to send a card to thank for the condolences. 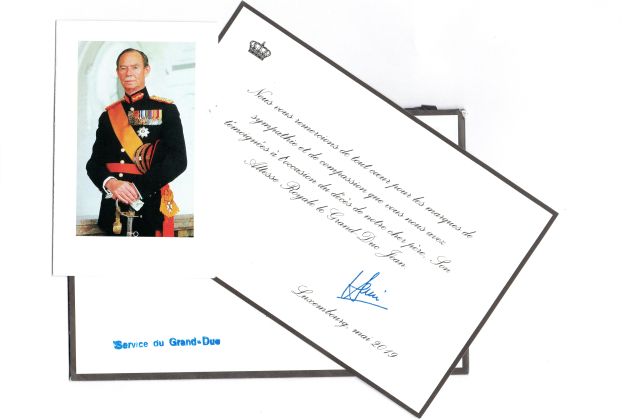 An engagement in Luxembourg – Wedding date